His professional career as a lawyer has been dedicated almost entirely to public service. He has served in the Office of the Attorney General for more than 29 years, starting in 1989 with his appointment as a deputy assigned to the Idaho State Tax Commission. He was later promoted to Deputy Chief of Staff and then Chief of Staff before winning his first election to the office in 2002.

Throughout his career, Attorney General Wasden has been recognized for his leadership in the legal profession, public health, protecting children and consumers, prosecuting public corruption and promoting open and transparent government.

In 2014, Mr. Wasden received the Lifetime Achievement Award for the Leaders in Law program sponsored by the Idaho Business Review. He was chosen by his western colleagues in 2010 to receive the Courage in Public Service Award, a rarely-given honor that recognizes the courage and integrity he brings to serving Idaho and its citizens.

Attorney General Wasden served for a decade on the Board of Directors for the American Legacy Foundation, the nonprofit created in the wake of the national tobacco settlement to educate youth and adults on the risks and dangers of smoking. After stepping down as Board Chairman in 2014, the foundation donated $350,000 to the University of Idaho College of Law to create a scholars program in his name. The UI College of Law also awarded Attorney General Wasden with the Faculty Award of Legal Merit in May 2015.

Attorney General Wasden earned his J.D. from the University of Idaho and was admitted to the Idaho State Bar in 1985. He earned his Bachelor of Arts in political science from Brigham Young University in 1982.

Lawrence and his wife, Tracey, were married in 1980 and have four children and 11 grandchildren.

I’m pleased the court recognized the validity of our arguments. @GovernorLittle and I will remain vigilant and aggressive in defending Idahoans and Idaho businesses from future attempts at federal overreach in whatever form. 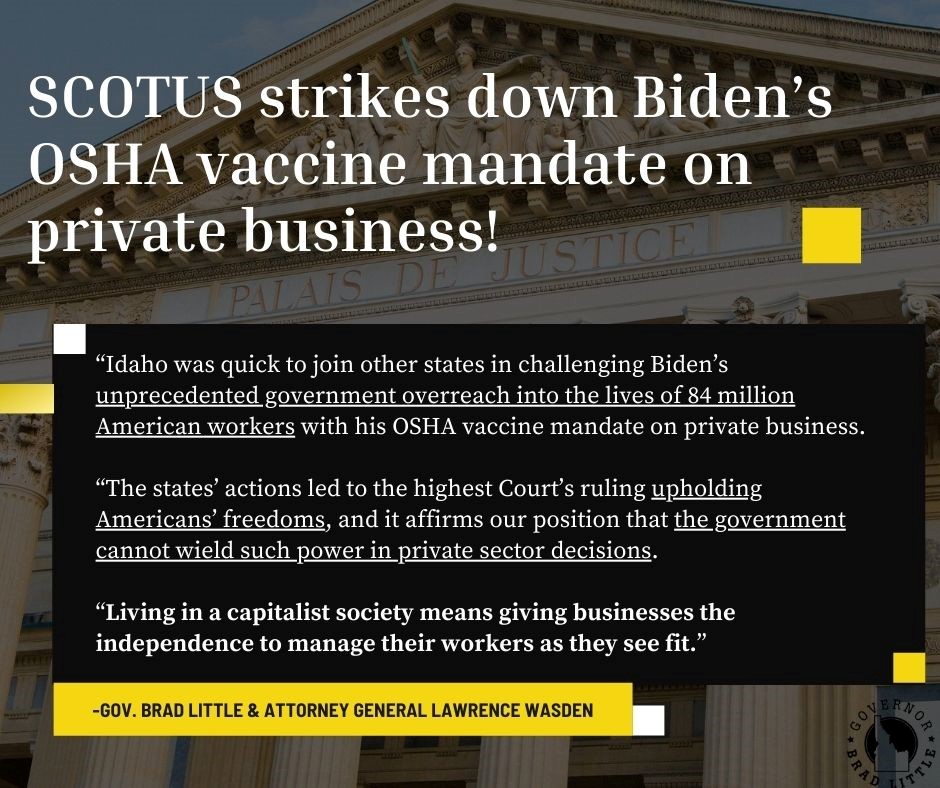 If you missed Wednesday’s training, the video and related materials are posted online. Feel free to bookmark and/or share with those who might want/need to brush up on Idaho’s open meeting and public records laws.

Thank you to everyone who attended this afternoon's virtual open government seminar. All office manuals referred to during the training - including the open meeting, public records and ethics in government manuals - are available here. https://www.ag.idaho.gov/office-resources/manuals/

We're 2 1/2 hours away from our virtual open meetings and public records seminar. It begins at 2:00 PM MST. If you're interested in learning more about open government in Idaho, join us for this free training! Registration details here: https://www.eventbrite.com/e/attorney-generalidog-virtual-open-government-seminar-tickets-223573031957