Georgia Attorney General Chris Carr believes there is no more solemn responsibility than to protect and defend the Constitution of the United States, Georgia’s laws and Constitution, and the interests of Georgians.

Georgia Attorney General Chris Carr’s devotion to Georgia has guided his professional career, and his appreciation for the law and commonsense solutions has fueled his passion for results-oriented public policy.

Chris was sworn in as Attorney General on Nov. 1, 2016, after being appointed by then-Governor Nathan Deal to fill out an unexpired term.

Chris was then elected statewide by Georgians on Nov. 6, 2018, to serve a full, four-year term.

Early on in his work as Georgia’s Attorney General, Chris was appointed to the National Association of Attorneys General’s Human Trafficking and Substance Abuse Committees. Understanding that these are “all-in” issues, Chris created a Georgia statewide network to strengthen our state’s response to the opioid crisis. The Statewide Opioid Task Force, which has been praised as a national model, now includes more than 300 public, private and non-profit entities that are working together to close gaps and save lives in this fight.

Chris has used the same approach to help address Georgia’s gang problem, which often is at the root of many criminal activities. He launched the Georgia Anti-Gang Network in 2018 to bring together more partners to create a more strategic response to gang activity in the state. Chris’s belief that the law-abiding Georgians deserve freedom from fear led him to re-dedicate efforts to disrupting the gang networks infiltrating our communities with violent crime.

In 2019, Carr worked to secure funding for Georgia’s first Human Trafficking Prosecution Unit to crack down on child sex traffickers and buyers. It is the latest in a series of actions and changes to Georgia’s laws to end human trafficking and protect victims.

Chris is committed to enforcing Georgia’s Open Records Act and Public Meetings Act to help ensure government transparency. Under Chris’s leadership, the Georgia Department of Law has conducted an Open Government Tour across the state to educate officials on their responsibilities to the public under these laws, and he brought the first-ever criminal case under the open records law.

Since 2018, Carr has been working diligently with statewide officials to dismantle a horrible, systematic elder abuse scheme that spanned the entire southern half of the state. His office is now leading the prosecution of the perpetrators. He also created a Consumer Protection Guide for Older Adults to help educate and prevent members of Georgia’s aging population from falling victim to exploitation of any kind.

Before becoming Attorney General, Chris gained years of valuable experience in economic development, state and federal policy-making, and the law.

During his six years as U.S. Senator Johnny Isakson’s Chief of Staff, Chris advised the senator on federal legislation and on judicial nominees for the U.S. Supreme Court and lower federal courts in Georgia and across the country.

As Commissioner of the Georgia Department of Economic Development from 2013 to 2016, Chris led the state agency responsible for creating jobs and investment in Georgia. During his tenure, Georgia was named the “number one state for business” three years in a row.

The department under Chris’s leadership helped facilitate 1,069 projects across the state that represented approximately $14.4 billion in investment and the creation of more than 84,000 jobs. In 2014, the Georgia agency was recognized as the top economic development agency in the country.

Chris served on Georgia’s Judicial Nominating Commission, the body charged with recommending candidates to the Governor to fill judicial vacancies, from 2011 through 2018. He is also on the Board of Advisors for the Atlanta Lawyers Chapter of the Federalist Society for Law and Public Policy Studies.

As Vice President and General Counsel for the Georgia Public Policy Foundation, Chris worked with Georgia lawmakers and policy specialists from Georgia and around the country to craft quality legislation that would bring positive results for Georgians.

Chris is a graduate of both the University of Georgia’s Terry College of Business and Lumpkin School of Law.

Chris and his wife, Joan Carr, have two daughters.

The only thing that’s declining right now for Dems are their poll numbers & the confidence that Americans have in their leadership. #gapol @FoxBusiness #CavutoCoasttoCoast

Sage advice from my friend @craig_camuso.

If your area is being affected by winter weather, play it safe today.

And as always #GoDawgs!

Today is a good day to stay inside….and watch the replay off the National Championship game. @GeorgiaFootball

Great to be with @GABankers and you! Thank you for your great partnership. 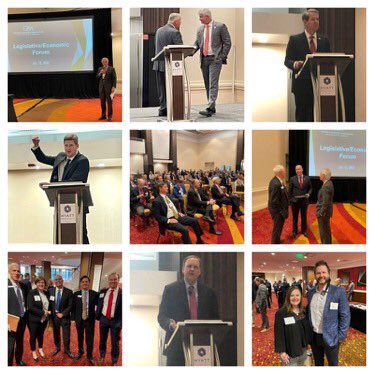 While Biden falsely compares us to George Wallace & Bull Connor, his administration is delivering skyrocketing crime, empty store shelves & the highest inflation in Atlanta in more than 40 years.
#gapol